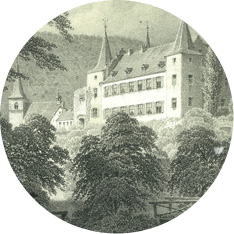 Today, the Confrérie Saint-Etienne is considered to be one of the oldest wine brotherhoods in France, and its original rules and regulations dating back to 1561 are still in use.

After a long period of prosperity, it slowly began to decline after the French Revolution and faded away in 1848. In 1947, the Confrérie was reborn in its current form, thanks to the efforts of a group of winegrowers and Alsace wine devotees led by Joseph Dreyer, its Founder-Treasurer, with a mission to promote the knowledge and appreciation of Alsace wines.
In 1973 it established its headquarters in the Château de Kientzheim, near Kaysersberg, which was built in 1563 by Baron Lazare de Schwendi, an imperial general who was also a great connoisseur of wine.

During its history, the Château has belonged to various families, including General Monclar, Georges-André de Golbéry and, lastly, the Castex family, who sold it to the Confrérie in 1973. Since then, major restoration work has taken place, notably the construction of a magnificent cellar housing more than 60,000 bottles: the celebrated Oenothèque (wine library) of the Confrérie, with vintages dating as far back as 1834.