The following is a history of our chapter as written by Jack L. Eidson MD on March 16, 1985: 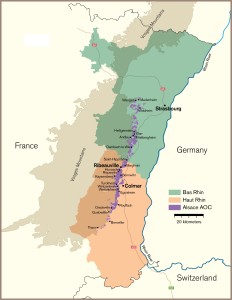 The valley of the Rhine River, bordered on the east by the Swartz Wald, or Black Forest, and counter-balanced on the west by the picturesque forested Vosages Mountains has been a pathway to history.

Here, Roman legend tells that French viticulture was flourishing in the First Century of the Christian era.  Roman legions marched along the main road through the valley lands and quaffed their daily ration of wine as they brought civilization to the rebellious Teutonic tribes.

Here in this beautiful Rhine valley, protected from harsh winds, and warmed by warm summer sun, there developed great vineyards.

This was the land of Charlemagne, the Holy Roman Empire, the scene of epidemics, wars and invasions.   This was Aussey or modern Alsace.

This was a land whose people overcame invasion and plunder to progress through the centuries to tend their vines, lovingly look after the living wine, to transport it in carts over high impassable, rutted roads to Rhine and Cologne where they went on to Sweden, Denmark and to England, where Alsatian wine enjoyed exceptional popularity at the Court of Edward III.

Alsace is a remarkable land of unusual beauty and productivity.

It is a scenic land with 150 miles of the Vosages Mountains covered with heavy growths of fir and beech, with panoramic views of the Vineyard Slopes, old castles and monasteries.

Alsace is truly a land of plenty with wild raspberries and

strawberries, blackberries and mushrooms.   From the mountain you can see fat cattle, geese, grain, vegetables, and the overwhelming ordered greenery of the vineyards laden with dusted purple grapes of the Riesling, Muscat, Traminer / and Gewurztraminer, Sylvaner, Pinot and lesser varieties.

And then there are the people of Alsace … sturdy people with fierce pride in their land and its products.   People who have a saying “Never mind who sits in power, we will run our own business in our own way.”

It is within this framework of the land and the people that there was founded the Confrerie Saint-Etienne in the XV Century at the place of Ammerschwihr.

The Brotherhood of Saint Stephen was brought about by those in 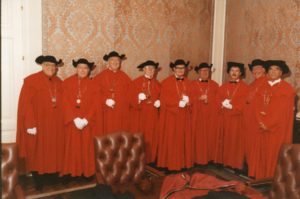 the wine trade “to bring their wines under official inspection to be brought out from the city wine cellars in order to offer these irreproachable wines to the general public.”

Over he centuries the Confrerie has expanded its base of membership and like other wine Confreries has taken into general membership gourmets from around the world.

The Confrerie Saint-Etienne is the oldest and most exclusive of all the Orders.

Membership until 1971 was only possible by journeying to Alsace, where certain tests were conducted and the applicant considered by the membership.

However, the Confrerie has now charted a North American Chapter to form a Grand Council, select members and induct them into the first Order of the Confrerie.

In 1970, Robert Cameron, who was a member of the Confrerie in France, was the Air Vice Marshall of Canada and Betty Barker’s first cousin.   He approached Betty and her husband Dr. Bob Barker, about starting the American Chapter.   They, in turn, talked to Jack Holmes and Joe Ballard.   Then, the first Grand Council was formed consisting of Jack Butler, Berl Godfrey, Jack Eidson, Bob Travis, Joe Ballard, and Jack Holmes as the first Grand Commander.  We got off the ground running and were chartered in 1971.

Now we are at an all-time high with 104 members, having two formal dinners a year – a spring and fall plus Bastille Day type French picnic every summer.  Then occasionally we have called meetings, such as a wild game dinner or just a wine tasting as we have done in the past.

No one can be received into membership without the unanimous approval of the Grand Council after undergoing the prescribed wine tasting examinations.

Induction shall be at the spring formal dinner, except for those who take the advanced order in Alsace at prescribed times and also at the fall formal dinner.

A little past history of the Confrerie – The Confrerie of Saint Etienne went underground after the French Revolution in the 1790’s like all other French wine Brotherhoods.   It was not revived publicly until after the First World War in 1919.  Then after the Second World War in 1946 the French Alsatian decided to limit the vineyards in the main to the noble grapes of Gewurztraminer, Riesling, Tokay, or Pinot gris and the Muscat and Sylvaner.  This they have done to the present.

Writers use many poetic, flowery words to describe wines.  One which I want to pass on to you is a writer’s description of a spicy Alsatian Gewurztraminer, “This wine is clothed in velvet, it is perfumed, it is brilliant and it seduces the ladies for it is potent and enchanting.”

Another quotation that I would like to pass on to you is one of my favorite from Benjamin Franklin – “Wine is constant proof that God loves us and loves to see us happy.” 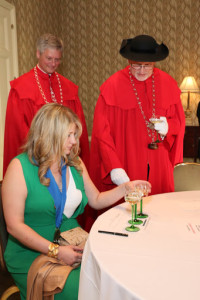 All members of the Confrerie Sainte Etienne are friends of Alsace, their wines, foods and customs and interest in promoting international goodwill.

There are three grades of membership progressing from apprentice to companion and finally to master.  The member level is displayed respectively by wearing a Blue, Red or Green ribbon with a cask.  Upward progress is made through a series of progressively more demanding wine tasting tests given only at the solemn Chapter meeting.   One test is given to each of these sessions.  A Grand Master presides; his administration is guided by the Grand Council and served by the proper offices.